Life hurries on faster than I can blog about it. Anyway, last month, I was able to visit the North Carolina State Fair. First priority was to have a visit with my friend Anitra, who has had a tatting display there for many years, and was named Female Craftsman of the Year in 2007. 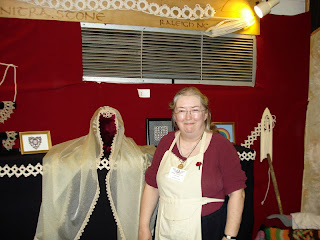 Her booth was in a building called Village of Yesteryear, which was full of different crafts, with many ongoing demos. There was another lace maker there. As I walked by, I heard someone ask her how long it took her to learn to make lace. Her reply was that she was still learning. What a nice thought. I know I am still learning. 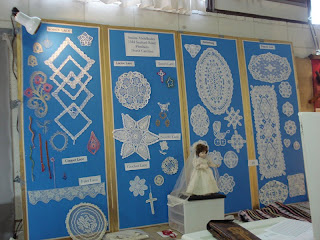 On to Exhibits... I thought there was supposed to be some tatting in the Arts & Crafts Building, but I never found it. So on to the 4-H Exhibition building. (In NC, tatting is considered a Home Furnishing.) This tatted mat won both the lace blue ribbon and a special judge's award, so good for her! 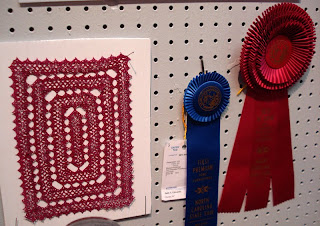 Here is a framed motif by Arlene. 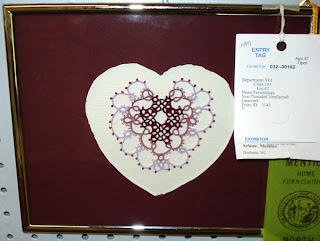 I think I've seen this piece on someone's blog, but unfortunately, can't remember where. 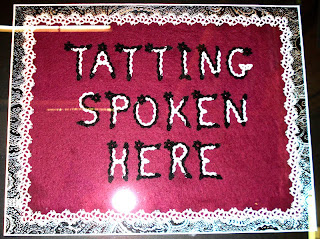 I also saw this collection of heart motifs. Also there was a clothing(?) item with tatted trim, not pictured, camera battery dying. 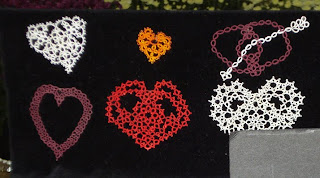 I wonder if there was more tatting there that I may have missed. I had made a quick circuit around the room and then got all wrapped up in the quilt display, where a lady was telling about each quilt. Next thing I knew, my cell phone was ringing. DH was bored and ready to go home. Sigh... Oh well, I had a good time while it lasted.
Posted by Martha at 12:13 AM 4 comments: Links to this post

How Does Your (Grandmother's) Garden Grow? 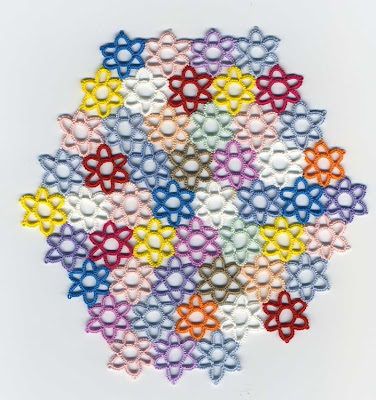 In last summer’s issue of Tatting Times, there was a pattern called “Grandmother’s Garden” made up of tiny motifs you could make by emptying shuttles. I looked at it and thought, “nah, not something I would make…” A few weeks later at the Palmetto conference, I saw Karey working on this piece, which had grown larger since the picture in the newsletter. It did look more interesting “in person” than on the printed page. Then I saw several other people there working on theirs as well. Soon after I got home, someone else emailed me a picture of hers in progress. I can only take so much watching other people having fun; so I had to join in with the thread left over from these motifs. This pattern is addictive. I went from emptying shuttles to carrying some extra wound bobbins with me as a great on-the-go project when I have just a little extra time. My piece is pretty random. Look here for Pam’s beautiful orderly interpretation. When I decide on the final size and shape, I will probably add a solid border all around.


Working in different colors can lead to a color “blip” at the site of the joins. To minimize this, pull the thread loop up toward the front side of the work, so the blip will be on the back side. 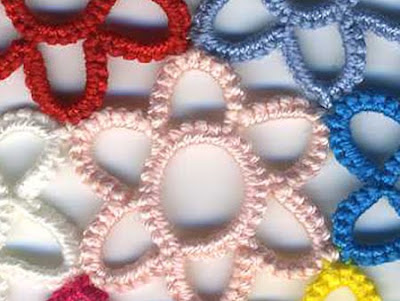 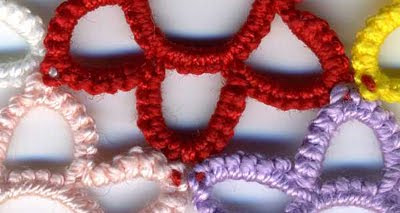 For me, the magic thread is the only way to go with this many thread ends. If I had to sew in all these ends, well that wouldn’t happen in my lifetime. (The granny afghan on my sofa still has shaggy threads on the backside a year later.) You can use Google to find links for several tutorials and videos. A version I saw once had you just pull in the thread ends when finished with the tatting. For goodness sake, tie a knot, then hide the ends.
Karey has graciously shared the pattern here, (Scroll down to Oct 26) It’s really easy. She would like to hear how many motifs, with ends worked in, that everyone has completed by Jan 1, so if you join in, let her know.
Posted by Martha at 11:40 PM 9 comments: Links to this post 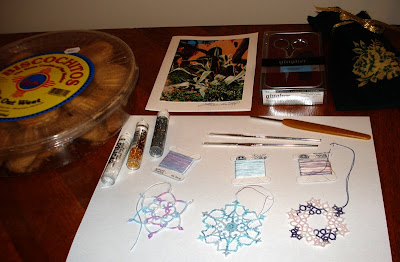 I was so lucky to win a giveaway from Miranda at the Tatting Fool blog. This package arrived very quickly, and my first thought was why was, it so big and heavy? It turned out there was an extra surprise inside--a package of Biscochitos, the official cookie of New Mexico, flavored with cinnamon and anise. I do love cinnamon. I had enough will power to wait until I charged the camera battery and took the picture. But since then, I've been eating quite a lot of them. Will power only goes so far, you know ;)

There were three thread samples, and not just any thread, but HDT by Lady Shuttlemaker and Yarnplayer. Plus, a snowflake made with each thread so I can see how they work up. The snowflakes are all Miranda's designs, and I especially like the one in the middle. My picture is pretty poor, but I can tell you these are very nicely done.

There are Delica beads and Gingher scissors with a leather point protector in a little tin. Three crochet hooks, two of them the tiny sizes great for pulling beads onto picots, and one with a comfort handle. And everything in a pretty re-usable fabric bag.

Thank you Miranda, for being so generous!
Posted by Martha at 9:25 PM 5 comments: Links to this post

A Gift and a New Challenge

My friend Ridgewoman recently surprised me with a gift of this book, Spitzen Ideen by Susanne Schwenke. Since many of the patterns have block tatting, she said it made her think of me. It is is a delightful little book and I am very grateful to have it. 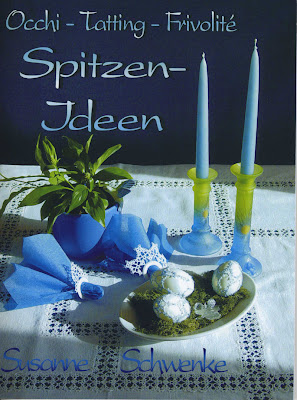 It is a German book, but it is very easy to understand. There are clear diagrams for each pattern, and there is a German/English glossary of tatting terms used in the patterns, which are written short hand style. It has edgings and insertions, snowflakes, and Easter eggs. 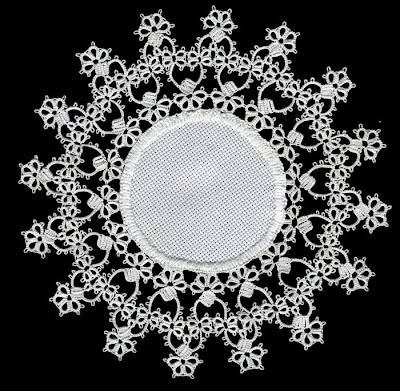 This is my favorite pattern, which came out around 5 inches diameter in size 30 thread. 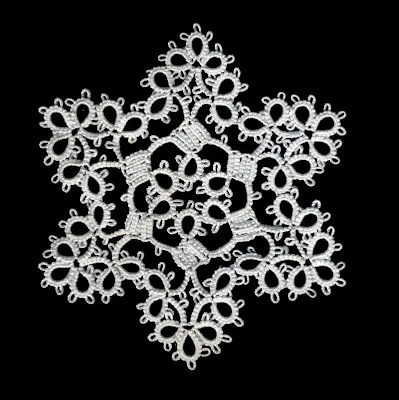 I made this snowflake next, chosen for the pretty block tatting in the design. I an sure I will be making more designs from this book in the future.

On another note, most of you are probably aware of the 25 Motif Challenge. Sharon began this a few years ago as a way to encourage tatters to see if they could finish 25 pieces in a year. She and her team post pictures of everyone's progress. Viewing that blog is always interesting, and has led me to meeting new people and learning of patterns, threads, and books that I "must" have. The basic guidelines are here. She lets each person define what a motif may be, which has ranged from a single earring to a large doily. Some participants choose to further refine their own challenge, for example, to make 25 animals or snowflakes. I am ready to begin again, and for this time around I will count only motifs made from books. I have some new books and some old ones that have been neglected too long. Don't worry, I'll still be making fun stuff from online patterns, and designing some of my own, but only patterns from books will count toward my challenge, to make it more, er, challenging. So these will be the first two for the new challenge.

Posted by Martha at 2:51 AM 8 comments: Links to this post