Kindly remember a few posts ago, where I showed several versions of mock hairpin lace.  There is no "right" way, but rather one should choose the best version for the project at hand.

This is the way I came up with that works best for my angels.  You can see the traditional crocheted hairpin lace on the left and the tatted mock lace on the right. 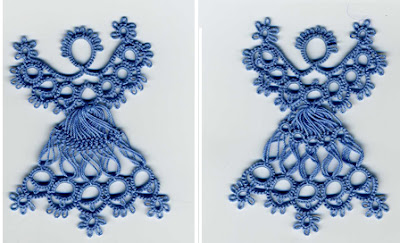 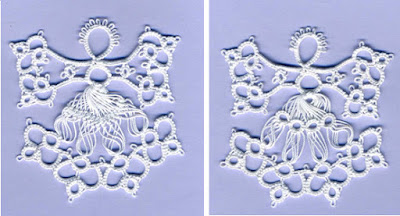 With the blue angel, I carefully gave each picot a half twist just like real HPL when I made the joins.  The result originally was sort of lanky and stringy, but I was able to block it to look nice.

With the white angel, I joined to the long picots keeping them straight with no twisting, and got this pretty effect without the need to block.  This is a little like my broomstick picots.

In both cases, when joining to the long picots, I was careful not to pull the join too tight, which would bend the curve on the loops.


If you want to know more about broomstick picots, named for their resemblance to broomstick lace, see my post HERE, and there are more patterns using that technique in my book "Playing with Picots"
Posted by Martha at 12:50 AM 7 comments:

The examples of mock hairpin lace using split rings that I have seen before all had one long picot on each side per split ring, so the dimensions would not work for the patterns I am working on. 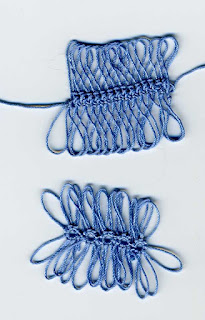 But, if you make lots of picots on each split ring, this has definite possibilities.  I'm excited enough with my little test scrap to work on this idea some more.
Posted by Martha at 2:57 AM 6 comments: 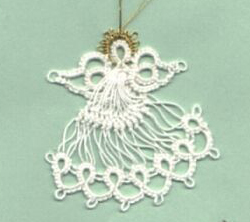 Do you remember this  Hairpin Lace and Tatted Angel?  It was the first pattern I shared with Georgia's Online Class.  (The directions are a little primitive compared to how I write now.)

Later update:  Silly me, I forgot there's an updated, improved version right here on this blog.  Just click on "Free Patterns" at the top of the page.  Pardon me while I go sit in the corner and feel dumb for a while  :) 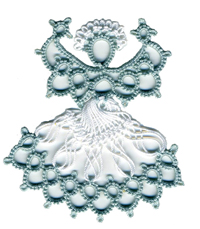 This hairpin and tatted angel is one I taught at Palmetto Tatdays this past year.


I have several more elaborate hairpin and tatted angels in the works.  Would you like to see a book of those?

The patterns are all based on "real" hairpin lace, made with a hairpin loom and a crochet hook. I really like hairpin lace.  After the first fiddly bit getting started, it's quick to make and very neat and pretty.  But maybe not everyone has a loom or wants to learn how.   In planning for the possible book, I wondered about the option for substituting tatted mock hairpin lace for the real thing, so I did a comparison of different types.  (If I had been paying attention, I would have noticed this had been covering in Georgia's class a few years ago.  Go to the 2011 index HERE and scroll down. )

Anyway, these are my results, all pieces 1 inch wide, and 15 loops per side, just as they came off the loom or shuttles without blocking. 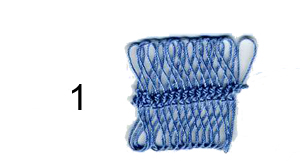 4.  This one is a pearl tatted chain, alternating 1 ds on each side, with long picots in between.  It's a little longer than the real HPL, but might do.

6.  I have seen this one in several places.  It is made up of {[picot, ds flipped] [picot, ds unflipped]} repeat.  Not as long as Ruth's, but still too long for my purpose.

7.  This is another "true" crocheted HPL, but with a difference.  In the book, Hairpin Crochet, Technique and Design, by Pamela Thompson, she makes a different sort of basic braid.  Unlike the basic braids in other books I've consulted, she works 1 sc plus a chain stitch per loop.  So this makes a HPL braid with similar dimensions to some of the tatted mock HPL.  Maybe useful for substituting a crocheted braid into a tatted braid pattern.

8.  Not pictured.  There are several patterns where a strip of small split rings with a long picot on each side is used for a HPL like effect.  Some very pretty patterns, but again, very long for the number of loops.

CONCLUSION: There are many sorts of Hairpin lace braids, both traditional and tatted mock versions.  If you are working a pattern using HPL, be sure you are aware which version the pattern is using.  Be very careful with substituting one style for another.

Designing - from Doodle to Angel 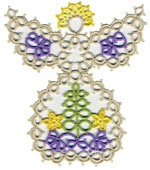 People sometimes ask me about my designing process.  If I'm making something realistic, like a horse or a flamingo, I go to Google Images for pictures to help visualize shapes and proportions.  Sometimes searching for drawings instead of photos helps.

If I'm doing something more abstract, then I start by drawing the image in my mind.  Just two problems there -- my mental images are often a bit vague .... and I can't draw. My drawings are usually more of a rough doodle.

So here is my sketch for an angel, one little bit on a page of doodles: 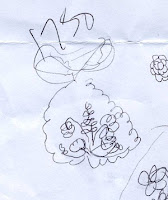 For the skirt, I was envisionning something similar to this quilt square I did a few years ago, but with one of the tall flowers in the middle. Once I picked up my shuttles, it took maybe ten minutes to realize those flowers were much too big.  So then came lots of experimentation with smaller motifs.  Lots and lots of little motifs, until they looked right and fit together.

Once I had the center bits done, then came the outline to make the angel shape. This was actually easier than the center.  Before starting, I gave a bit of thought to where to begin, and what direction to go in, to make the whole outline in one pass without cuts and ties.

So there you have her, Grace, one of the angels in my book "A Flight of Angels."
Posted by Martha at 3:47 PM 8 comments: