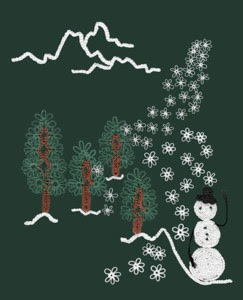 Palmetto time is just around the corner. This is a wonderful event: classes and activities, a vending room with tons of thread and books, and best of all, just socializing with all your tatting friends. I really recommend it.

Update: Please forgive me for failing to give proper credit. The design above is by Pam Freck, and will be on your Palmetto T-shirt, so that's another reason to come.
Posted by Martha at 11:03 PM 5 comments: Links to this post 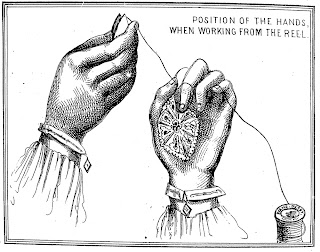 My present to myself, alluded to in a previous post, was a photocopy of a complete version of Tatting, or Frivolite by Mrs Mee and Miss Austin. Mrs Mee was quite well known in her day, and had published many books of knitting and crochet beginning in the 1840's. She has been overlooked by tatting historians, but I consider her a true pioneer.

From Tatting, or Frivolite, pp iii-iv:
" Having been long solicited to bring out a work on Tatting (or Frivolite, as it has been called of late years in Paris), my only hesitation in doing so has been, I thought it difficult to write so that all might understand me. I never remember learning the work, or when I did not know how to do it. I believe it was taught me by my grandmother, who, if she had been living, would have been in her hundredth year. I mention this, as I have heard that a claim has been made by some one lately, to have invented the work, which certainly has been known as Knotting or Tatting, for more than a century. My plan of forming the work from the reel or skein, and only making the foundation from the shuttle, is original, as are all my patterns; and I offer it with confidence, believing that many who have never before attempted it, will be induced to learn. In most of the patterns, the old plan of drawing up the loop from the work formed round the fingers, is altogether done away with; and this has been the great difficulty with many. The patterns are entirely different to anything before published, and I trust will meet with general approval; they are applicable for varieties of purposes, and the great durability of the work will be a recommendation to many. The cottons as directed must be obtained; those of Messrs. Walter Evans & Co. being the best produced.

From page vii:
"...In my new method of Tatting which I have endeavored to show in the Illustration the work is formed from the reel, while the foundation is only used from the shuttle, which is the thread that passes through the work. Take both threads between the thumb and fore finger, letting the one from the reel or skein be uppermost; let this thread pass over and between the fingers of the left hand as shown in illustration..."


Therefore I submit that the true tatted chain dates to 1862 with Mrs Mee, not 1864 by Mlle Riego as previously believed by most tatting historians. And doesn't that sound silly and trivial, now that I've said it. Well, I thought it was significant.

PS. I do no mean to belittle Mlle Riego, and still consider her the Mother of Modern Tatting for her revolutionary change in the style of tatting designs. She may not have invented all of the technical advances, but put them to good use, as Elgiva Nicholls says. Elgiva had wondered why Riego had quietly started using chains in 1864 without drawing attention to what she considered the discovery of the century. I think this is why; the ladies of that time would have already seen Mrs Mee's little book, which was lost to us for a time.
Posted by Martha at 1:06 AM 8 comments: Links to this post