Some Stuff At My Mom's House

My mother-in-law gave us a camera for Christmas and I've been trying to learn to use it. 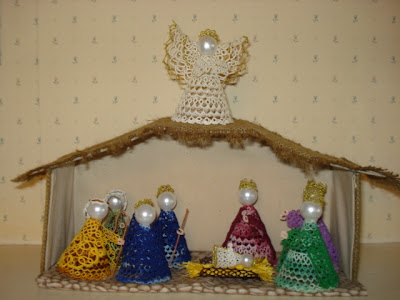 These are some things I have given my Mom in the past. First is the tatted Nativity from Ineke Kuperij, worked in size 80 thread. 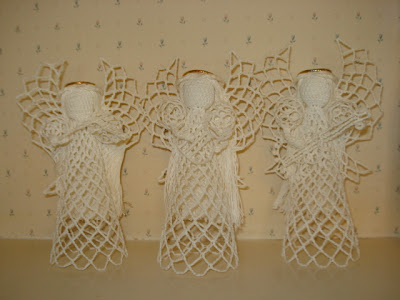 These are some crocheted angels with musical instruments. A shame they don't show up too well. 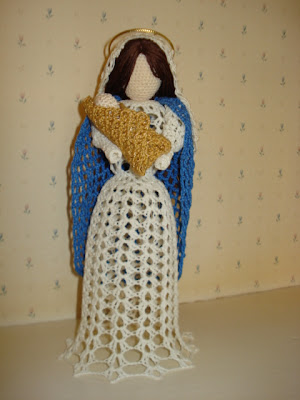 A crocheted Madonna from a magazine. 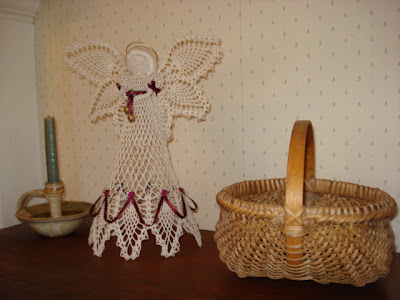 My favorite crocheted angel (I think the pattern book was Pineapple Home) and one of the few remnants of my basket weaving phase.

Back to the Challenge & Belated Christmas 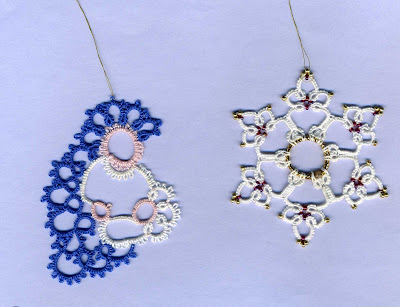 Well, it has certainly been a while -- I've been a little busier than usual and this poor blog has suffered from neglect.

These are a few of the motif ornaments that I made to give at Christmas. On the left is Mark Myer's Madonna, pattern at http://www.tat-man.net/patterns/motifs.html
I love the way he uses just a few lines and circles to suggest the shape, so subtle and elegant.
On the right is Jane Ebborall's Snowflake #2 (http://www.users.globalnet.co.uk/~nickeb/ ). I cannot say enough good things about this design -- I just wish the scan showed it better. As snowflake patterns go, this is a quick and easy one, but it's fancy enough even a non-tatter will appreciate it. At first glance you might think it's one of those patterns where you have to count and load the beads very carefully, but really it's so simple. One color beads on the shuttle and the other color on the ball and the pattern takes care of itself. It turned out I was out of cabone rings with Christmas fast approaching, so I improvised with some gold cord and hot glue to make rings.
I had said I planned to do the challenge again. I claim the chick, eagle, and both turkeys as motifs plus these two for a total of six on the second time around.
Posted by Martha at 11:51 PM 3 comments: