I really need to get disciplined enough to blog more frequently.  I have gotten really far behind with things to show.  Anyway, here are some more pictures from this year's Palmetto TatDays.  First are some pictures from the display/competition.  One of the great things about going to a convention is seeing so many things made by other tatters.  These are just a few, since many of my photos didn't come out too well. 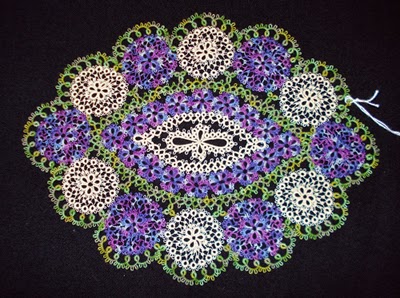 Stephanie Wilson made this and it won best of show, well deserved. 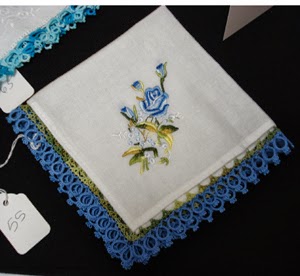 My own handkerchief (my tatting added to a vintage  embroidered hanky).  It won a ribbon in last year's State Fair. 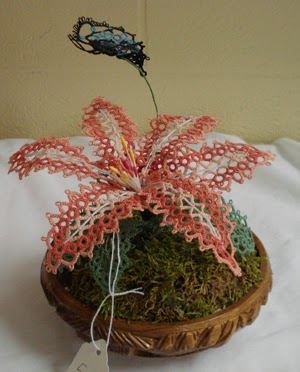 Sorry, I don't remember who made this 3D flower, but isn't it lovely? 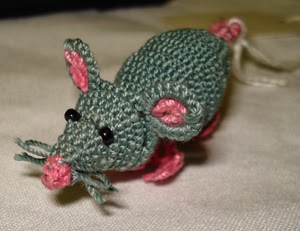 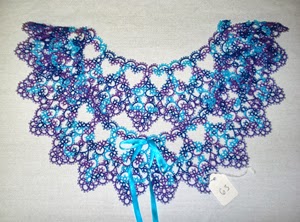 This lovely collar is by Patty Markley, from a Jan Stawasz pattern.  I really admire this piece, and the photo doesn't do the colors justice.

Sorry, I don't know who made this wonderful collar either.  The makers' names were hidden until after the voting and I didn't get back to check on all the names.


Tatting conventions are also good for lots of smiling faces.


News flash! If you admired the class projects from my previous post, now you can get your own copy of the patterns.  This year's Palmetto Pattern CD is already available now, details here.

Since I did not teach at the Palmetto Tatdays this year, I got to take lots of classes.  I had a great time just being a student, though I did miss teaching in some ways. 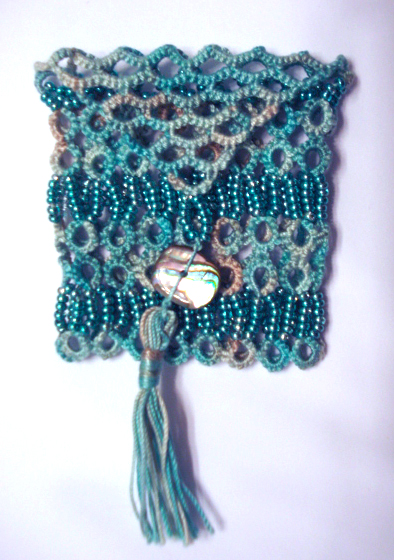 Here is the amulet bag taught by Erin. There were lots of people in this class.  I tweaked the pattern just a little for a slightly larger bag.  I still need to make the strap, but that should be easy.  The thread is hand-painted by Karey.  Karey couldn't make it this year and we missed her. 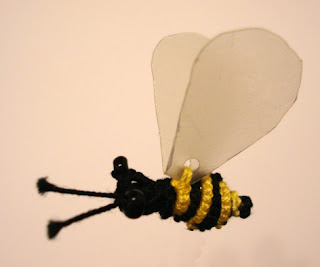 Next was Kaye Judt's 3D Bee.  This was a very fun introduction to bobble style tatting. 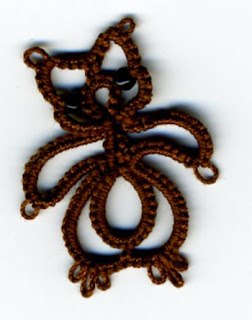 After the Friday night banquet, Riet always teaches the Night Owl Class, which is usually about ... owls.  This year's project was a cute little own designed by Jane Eborral.  Mine got a little squashed on the scanner, but it really is a nice pattern. 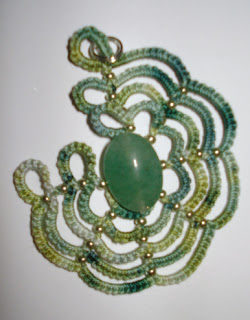 And then the impossible happened. I got out of bed and went to the Early Bird Class because I liked the project so much.  Donna led the class, but the pattern, "No Where Maze" is by Vicki Clarke.  This is more of Karey's thread.  I've decided it's time to actually use some of my special threads. 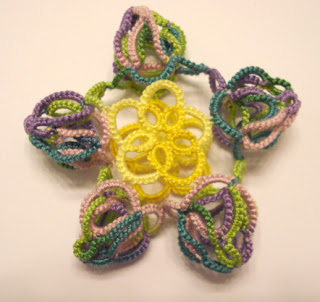 Then a class taught by Vicki herself, her 3D Northern Star.  This is a clever design, with little tatted pyramids joined to a front and back piece to make a puffy star. 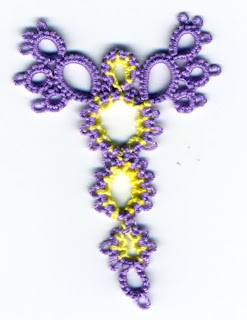 And lastly, Randy Houtz's Pearl Tatted Dragonfly, to really stretch those mental tatting muscles.  These are Maltese/Pearl Tatting rings, but each is special.  The first one is a self-closing pearl mock ring with self-closing mock rings thrown off, and a regular Maltese ring thrown off it too. And then a split ring Maltese ring, and then a Maltese ring with dsop (double stitches on picot) which is similar to a daisy picot, but different.  Randy prefers the descriptive term "Pearl Tatted Ring", but I am used to calling them "Maltese Rings" like Mlle Riego did. 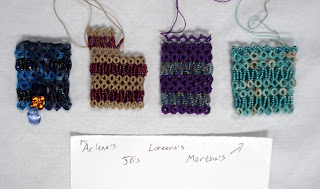 Here is a picture from some of us working on our amulet bags Saturday night.

And if you missed the fun, keep an eye on the Palmetto site, where you will be able to order a CD with all the class project patterns (lots more than these here), available sometime this fall. now!   Click Here for a link direct to their sales page.
Posted by Martha at 1:32 AM 11 comments: