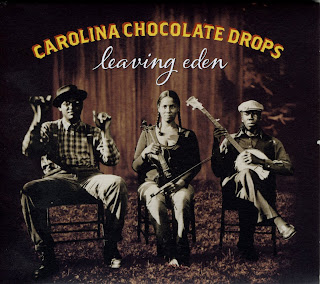 Tonight I went to a totally amazing concert by the Carolina Chocolate Drops. I don't know if I've ever been to a performance with more energy and enthusiasm. The whole crowd were on their feet more than once. They specialize in Old Time music, especially early African American string band music, but they play many other types as well. Rhiannon sang a Celtic thing (I wish I could remember what she called the style), that was like singing Gaelic for ten minutes without breathing and no discernible repeats of stanzas. Awesome. And she lives here in Greensboro. You may think you've never heard of them, but they are on the Hunger Games soundtrack, so there.

In the morning we leave on a sightseeing trip that will meander a bit and end in Toccoa on Thursday afternoon for TatDays. I can't wait. That will be so. much. fun.
Posted by Martha at 1:56 AM 3 comments: