It seems I spoke too soon about larger versions of Mary Konior's Spinning Wheel pattern not working out.  Mad Tatter, Alberta has made a version with 6 rings on Row 1 and 12 rings on Row 2 that looks very nice.  See her picture here.  There are more "bare" chains on the outer edge than the original pattern, but it still works.  Perhaps some intrepid tatter could work progressively larger versions to see how big they can be and still look good.  Not me though, I'm too busy tatting dragons.
Posted by Martha at 11:40 AM 2 comments: 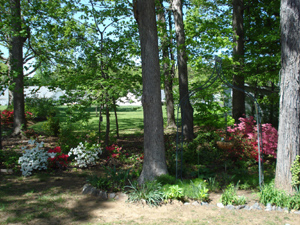 Here in North Carolina, dogwoods and azaleas are in bloom.  It's one of my favorite times of year. 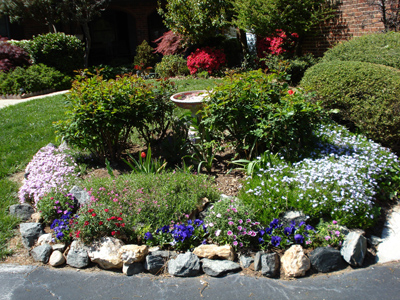 The front yard flower garden continues to delight.  The creeping phlox in the middle didn't bloom much this year.  I wonder if it needs thinning or feeding.  The pansies are still happy and the Sweet Williams are starting nicely. 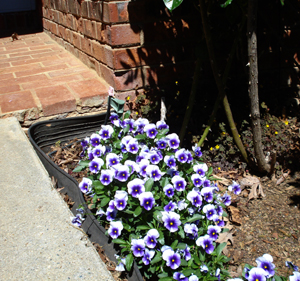 I know the pansies will die when the weather turns hot, but I wonder if the violas will survive.  I love them so much . 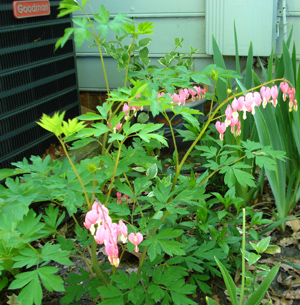 Last year, most of what I planted didn't come up, or died, or got eaten.  (Luckily I am blessed with the many perennials left by the previous owner.)  Here is one of my few survivors, last year a modest bit of greenery, this year a handsome flower. 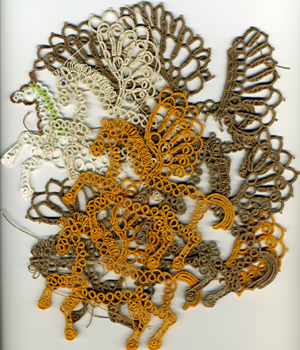 Meanwhile, after weeks of effort, I think I have this pattern tweaked to my satisfaction.  Progress on the new  book, though slow, continues.
Posted by Martha at 11:50 PM 11 comments: 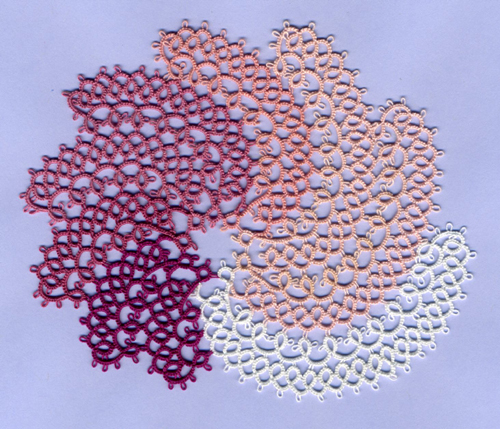 Way back last summer, I had the notion to adapt Mary Konior's famous Spinning Wheel pattern, by making each repeat a little longer to produce a spiral shaped effect.

For my first attempt, after a quick review of the pattern, for some reason, I thought it would be necessary to work the spiral version starting at the long end.  I did a few calculations for the number of rings per row, and soon produced the item below.  Well, it laid flat, but had no other redeeming virtues.  I decided to try again working from the small end outward. 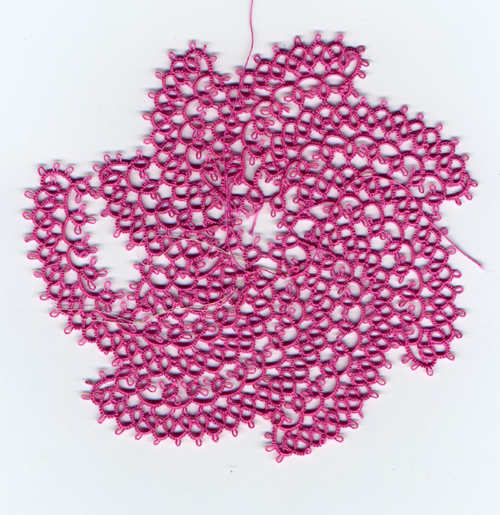 By the way, I had never worked this pattern before, but I soon appreciated its popularity.  The pattern is that  rare thing: easy enough to quickly memorize, but complex enough to be visually interesting.  In a word, elegant.

My second attempt (the first starting from the small end) was ruffling like mad after just a few repetitions.  I started over with fewer rings on the first row, but again, eventually it would ruffle out of control.  I'm not sure how many times I cut off rows or started over.  This went on for weeks.  What was once an elegantly simple pattern was now excruciatingly monotonous.  At some point, I returned to mathematical calculations.  It seems there is a geometric progression (is that the right term?) involved.  For extra ring, this doesn't just add to, but instead multiplies the number of rings in each successive row.  To make the spiral, I would have to leave more chains  not joined to in successive rows.  Finally, I came up with the final version, shown at the top.

In Mary Konior's book, she showed this pattern in just the two versions:  the small Spinning Wheel and the same design element as an edging around a linen center.  I used to wonder why she did not include a larger version all in tatting.  Now I know.  If there were more rings in the beginning row, then it would not lay flat, or more chains would have to be left bare, which would not have been as appealing.  I wonder how much trial and error she endured to arrive at the one perfect version.

Was it worth it, spending so much time and thread on this project?  Persevering with the attempt instead of abandoning it was good for my strength of character.  I arrived at an even greater appreciation of Mary Konior's greatness as a designer.  My finished project, not so much.  Sometimes, it's the journey not the destination that counts.
Posted by Martha at 6:43 PM 13 comments:

Do you remember Jon's Lace Mat Challenge?  The link to Jon's diagram instruction for this Norma Benporath pattern is here. (Right-click on the image and you can print it big enough to see.)   Anyway, I was surprised and honored to win the contest. Here is my mat: 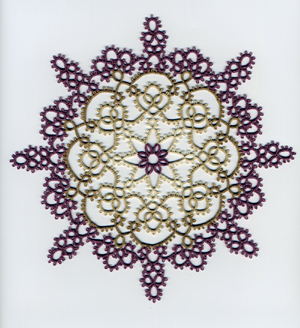 Jon graciously sent me a package of goodies for a prize. Just look: 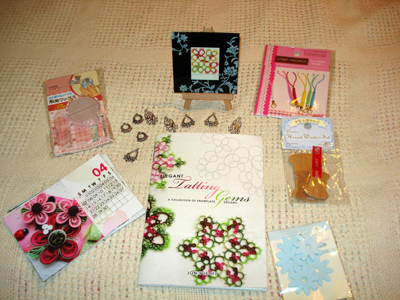 Best of all is a copy of Jon's book, "Elegant Tatting Gems."  This is a very nice looking book, with 18 snowflake designs.  I think many of them could be joined together to make mats or doilies.  Each pattern has both text and diagram instructions, with a clear photograph.  I am looking forward to trying these patterns.  (You can order Jon's books from her directly through her blog, or from Handy Hands, Tatting Corner, or Roseground.)

Also included were a tiny motif in a glass frame, a calendar with quilling artwork, some thread winders, some little cords for attaching charms.  Some findings remind me of dangley earrings - I'll be adding some tatting and beads to those eventually.  A thread conditioner looks just like the beeswax my mother used to have.

Thank you for everything, Jon!

Friends Luring Me Back to TatLand


Well, it's been a while.  I've been through a rough patch with DH in the hospital twice and having to care for autistic DS3 by myself. So, I was completely stressed and busy for a while. He is doing much better now, but it has been taking me some time to recover.  Once I could relax a little, an odd sort of inertia set in and I was getting nothing done.  I had kept in touch with a few friends, whose support kept me going, but otherwise, I was doing very little online, not even keeping up with email.  I'm better too, now, but I had reverted to my status as a world class procrastinator when it came to getting back to blogging.

But then, it was like Tatland calling out to me to come back.  Over a short space of time, I noticed several people posting pictures of things they had made from my patterns, including Fox, Jane M, and Sally.  Out of the blue, Fox sent me the package below with beads and a yummy little motif, and Erin sent me a link to a tatting history article. 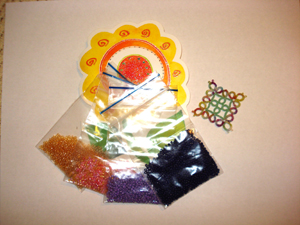 So, I sternly told myself it was time to get up off my butt and start blogging again. Who knows, I may even eventually get back to the history blog as well.  The new book is woefully behind schedule, but I'm working on it again.  Things are looking up.