I have made a terrible mistake.

As pictured in the book

While preparing for "Playing with Picots" I scanned the wrong model, so the illustration doesn't match the pattern text and diagram. This picture also appears at the end of the Palmetto class handout. This was from an earlier version of the pattern. The difference is whether to join into, or skip over, the "valley" where the long picots are joined together in Round 2. It works either way, but I thought the later version looked more interesting.


I haven't found my correct model yet. I've either misplaced it or given it away. I do have the purple model used for Palmetto.

Judging from the pictures in people's blogs, more have been following the photo than the pattern. We tatters are a visually oriented lot, aren't we?

Starting yesterday, an errata sheet is slipped into the book.

Thank you to StitchingSharon for pointing this out. 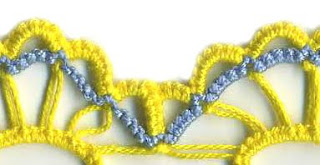 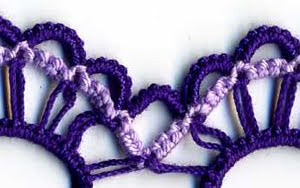 Update: Carolyn says: Martha, for those of us who have already bought the book, could you make the errata sheet available online so we can download and print it out for our copies? Thanks!!

I plan to email the errata sheet to everyone I can. I still have email address for everyone who used Paypal. Please contact me if you would like me to send you one. I'll be away from the computer over the weekend, but I'll get these out as soon as I can.

Playing with Picots -- Ready at Last! 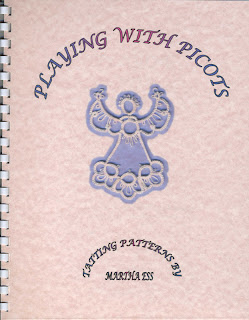 Guess what? I'm Back!

Back home from Palmetto, and back on-line. My computer seems to be recovering well, following an organ transplant of a spare video card donated by one of the kids. Woo hoo!

I have got sooo much catching up to do now. Since people have been asking about the new book, I first updated my website, so I can start taking orders, so here it is.

And now I am so tired. More stuff soon, I promise.
Posted by Martha at 4:40 AM 7 comments: