Recently, there have been discussions in the Facebook Tatting Group asking how to join long picots to each other .  I remembered I had done this years ago with the bookmark pictured above.

I used Ball Thread Joins to attach to picots tip to tip so they wouldn't overlap.  Pretty cool, huh?  In fact, I did this so long ago, that I thought I had invented the ball thread join, silly me.

I thought I had given this pattern to Georgia for the Online Class at the time, but maybe I never got around to it since I can't find it in the old lesson index.

I've added the pattern to the Free Pattern Page of this blog, see the link at the top of the page. (Note to self, the new website is way behind schedule, get back to work.)

The butterflies are based on a pattern from Butterick's Tatting and Netting from 1896.  Free downloads are available from Georgia's Archive of Tatting Books in the Public Domain (scroll down about halfway), and from the Antique Pattern Library's Tatting list (scroll almost to the bottom of the page).  I think it was also reprinted by Lacis under a different title, but I can't verify that right now.

Update: I originally did not have the pattern file properly set to share publicly, sorry.  It should work now. 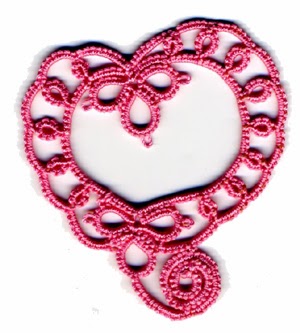 This is another of the variations of Karey's Heart from the current issue of Tatting Times that I talked about last time.  This is the asymmetric version.  That long coiled floating chain was a bit challenging.  I used a few Catherine Wheel Joins to hold it together.  I've been practicing those lately since I've been writing a pattern that uses them.

Have you noticed that all the tutorials for the CWJ show how to work it from the front side?  I need to work it from the back side on my pattern and adjust it so it blends in with the front side appearance. That should be easy enough, right? Just pull the first loop to the back instead of the front?  Sometimes it worked, and sometimes I had a twisty mess with no idea why.  Finally I decided that I got better results if I was careful to pull only on the thread coming from the previous stitch, instead of on both threads in front when I pulled to pop the loop to the other side. 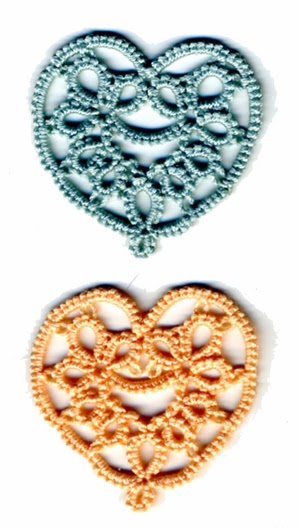 I was using Frivole's delightful Happy Heart pattern to practice and try different strategies for making the join from the back side.  The turquoise example has mostly good joins, but only because I picked so many of them out and re-did them.  By the end of that one, I had decided how to do them.  On the peach one, the CWJs were easier, and looked better, but I was concentrating so much on the joins that I didn't watch the tension on the chains, so it's all lopsided.  On the screen, it looks better than it does in real life, for a change.  Anyway, I love the little pattern, and I'll be trying it again.

In Love with Karey's New Heart 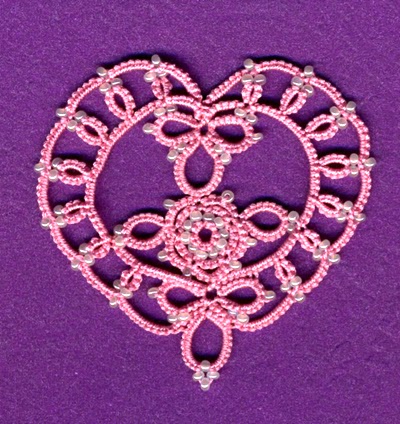 The latest issue of Tatting Times from Karey Solomon is especially nice because it has this heart with four variations. I fell in love with it as soon as I saw it.  This is the last variation; trust me to always start with the hardest.

It still needs blocking, and I'm missing a couple of beads where I made a boo-boo, but I'm very happy with it.  I'll make some of the other variations later.

I tinkered a bit with the instructions, though not the stitches themselves.  Karey reminds us, rightly so, that post shuttles are better than bobbin shuttles for carrying lots of beads.  Her low stress approach to this pattern is to tell us to load a goodly number of beads on 2 shuttles and when one shuttle gets low on beads, do a SLT and switch shuttles. But you know I love my bobbin shuttles.  A careful analysis of the pattern showed most of the beads are on shuttle 2 if you don't switch.  Also, there are lots of lock joins, where a hook is so much better than the point of a post shuttle. So, I wound most of the thread and beads onto an oversized post shuttle (a SewMate was big enough) and used an Aero for shuttle 1 with just a few beads on it. I could have it both ways, happy dance.  Also, I noticed that most of the work is chains, or rings thrown off with the chain shuttle, so I began the first ring as though working on the back side, so that most of the time, I would be working on the front side.

I really recommend a subscription to Tatting Times, so you can find gems like this in your mailbox.  Many of the patterns eventually show up in her books later, so I'm looking forward to an exceptional future book as well.

Here are links to Karey's blog and her website.
Posted by Martha at 12:17 PM 6 comments: 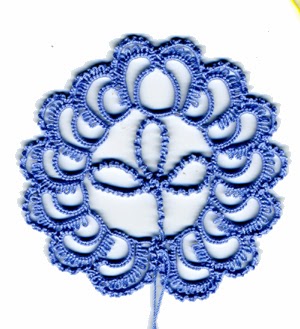 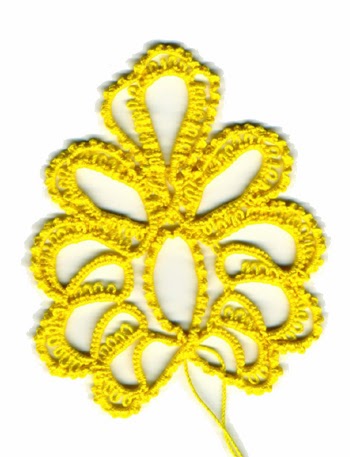 Here are two more antique motifs from a different collar in Priscilla No. 2. (See previous post for links to download the book.)  Again these are chain-only designs with lots of picots. These use lots of Victorian sets, also called rickrack tatting, made by making several of the first half stitches followed by several second half stitches.  It makes a nice texture.  I had to pull my rickrack chains very tight to make them fit the space to match the illustration.  Perhaps this was because I used the same weight thread for both the shuttle and ball threads, though the original pattern called for size 40 core thread and size 60 ball thread.

PS.  The Palmetto TatDays call for teachers and logo designs is now out.  Don't worry, there's lots of time before the deadlines.  Click Here for details.
Posted by Martha at 12:39 PM 3 comments: