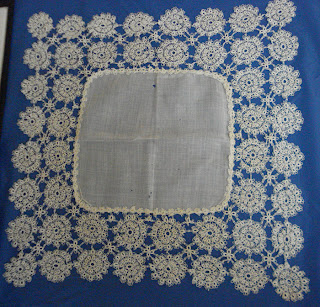 Here is it is again in a Japanese collection:

They think theirs was made in France in the late 1800's. What fun! And what a popular pattern, apparently. This could become a new hobby for me -- handkerchief spotting :)

Thank you to Ann W. who pointed out the site to the Here Be Tatters group.
Posted by Martha at 11:57 AM 3 comments:

First Christmas in our New House 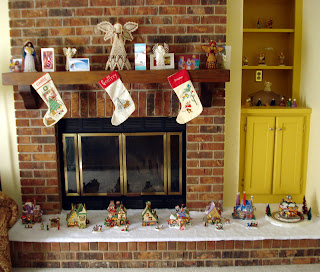 No tree for us this year, but I am fortunate to have a hearth for Christmas decorations. Decorating was both sweet and sad as I remembered loved ones who have gone on before. 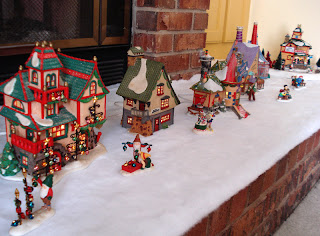 The Christmas Village houses had come from John's mother. 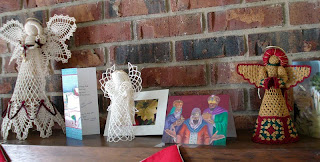 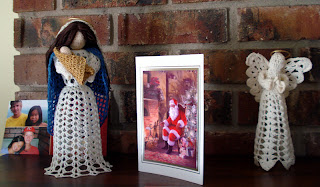 And these are angels which I had crocheted for my own mother... 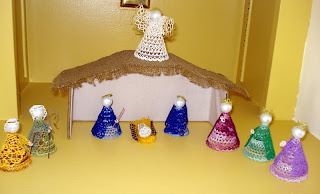 ...and her tatted Nativity set.

Best wishes to you all, whichever holiday you celebrate. May your new year bring joy. 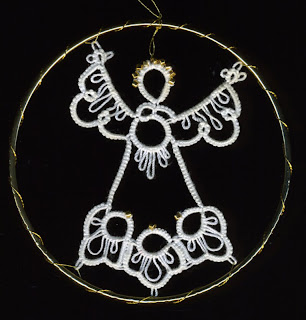 I traditionally give my coworkers a Christmas ornament. I was looking for something a bit quicker than usual, and decided my Big Sister Angel from Playing with Picots would just about fit the bangles if worked in size 30. I added a few beads and some picots to use for attaching. I felt just a little guilty that I did not make one of Jane's beautiful bead intensive ornaments like usual, but they seemed grateful anyway.

Strangely enough, I'm the only one who has remembered to bring in Christmas CDs, so they have to listen to what I like :)
I recommend Connie Dover's The Holly and the Ivy (Lovely folk singer/music historian, one of my favorite musicians) and
Mary Chapin Carpenter's Come Darkness, Come Light and
Cherish the Ladies' On Christmas Night --Christmas carols interspersed with Irish jigs and reels.
Posted by Martha at 2:22 AM 3 comments: 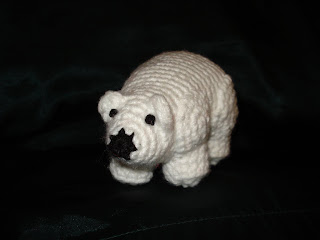 Some folks have reported having trouble understanding the directions for my crocheted polar bear from 2008. I've gone back to the original post and added some text and pictures for working the legs. Hope this helps!
Posted by Martha at 8:10 PM 6 comments:

Remember how excited I was to discover that I owned a tatted handkerchief that was identical to one in Mary Konior's collection? I made some fanciful assumptions in my belief that this tatting method predated published patterns.

Well, duh, the pattern was sitting on my bookshelf all along. Here it is on page 51 of "Tatting and Netting" by Butterick 1896, New York. 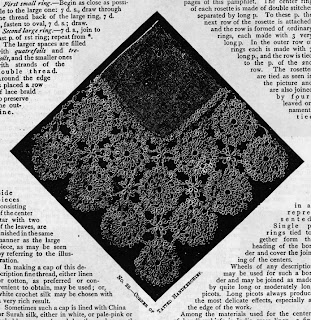 Was Mary Konior wrong in dating her piece as early 19th century? Maybe not. This book contains patterns that look like they were copied from previous works, and patterns that seem based on counting the stitches in old (to them) pieces of lace. So I still can't be sure when the design first came about, but I have to admit to the possibility that my handkerchief from Ohio could have been worked from the Butterick book. Sigh. It's still very precious to me.

By the way, this book, "Tatting and Netting" has some fascinating designs in it.

I want to share with you my secret... my secret for finding books. How often have you looked in vain for an old book; how often have you bought one only to find it cheaper at another dealer? Yeah, me too. That's why I am grateful for Bookfinder.com. It searches all the book dealers and gives you the location with price and postage for all the copies it finds. I've used it for both new and used books. I've gotten Beeton's Book of Needlework for a dollar plus postage, and a Jasper Fforde novel available in the UK but not the US. If you keep your eyes open, you might be the first to see and grab a bargain like a Mary Konior for 10 pounds.

A few disclaimers: Bookfinder does not always calculate postage accurately (depends on how the seller's site is set up), so be careful at checkout. Copies in other countries may be listed, but there is no guarantee that they will ship to your country. Bookfinder searches book dealers, but not other shops, so you may find books (especially recently out of print or privately published) in tatting supply sites that Bookfinder doesn't see.

My most recent acquisition was this little gem from Germany: 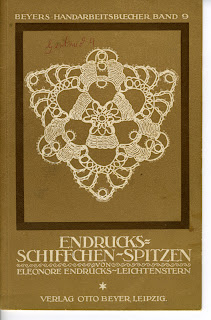 Published in 1920, it is public domain, so I arranged through Georgia to share it through the "Archive of Tatting Books in Public Domain"

Here it is in two parts:


http://www.georgiaseitz.com/public/endrucksinsertsdiagrams.pdf
Posted by Martha at 12:31 AM 4 comments: