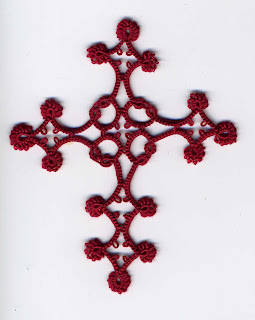 The snowflake I showed you recently has easily morphed into a cross. I may need to elongate the lower part just a bit, but I'm pretty happy with it as a first try. I've adjusted the stitch count to open out the square sections with the picots pointing in. I'll decide later which way I like best. 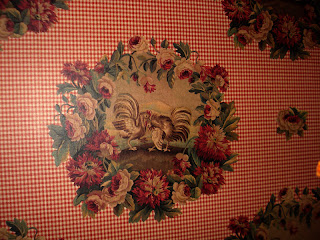 Meanwhile, the chickens have been banished from the kitchen and replaced with a low key floral. Putting up the new wallpaper was a learning experience. I learned I really, really don't like hanging wallpaper. 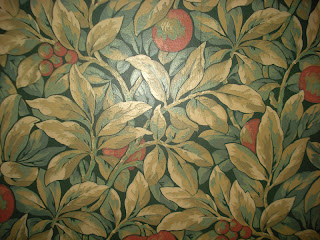 Now in progress is removing this wallpaper from the living room. While it's not as obnoxious as the bears and the chickens,it is dark and busy and doesn't get along with the furniture.
Posted by Martha at 2:39 AM 9 comments: 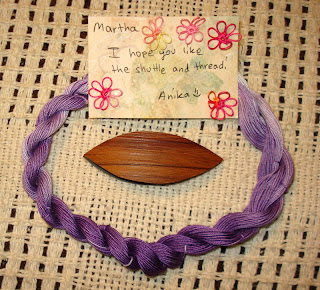 I was lucky to win a give-away from Tatting it Up. The shuttle looks like woodgrain, but it's actually made from vinyl. 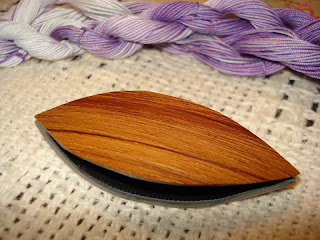 She also included some thread that she dyed herself. Isn't it pretty? She had instuctions for dying thread on her blog a day or too ago. Thank you so much. 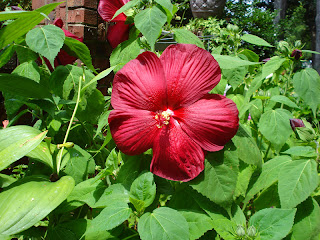 My new house's previous owner was quite a gardener, and I am enjoying the plants very much. I don't know much about them, so I don't know what I've got until it blooms. I was happy to find out a couple of bushes were hydrangeas. Some tall skinny plants turned out to be lilies. (The rather hardy fern at the base of a leggy rose bush turned out to be plastic -- can't win them all.) This weekend, this stunning thing appeared. It's huge, at least 6 inches across. Hibiscus, maybe?
Posted by Martha at 2:24 AM 6 comments: 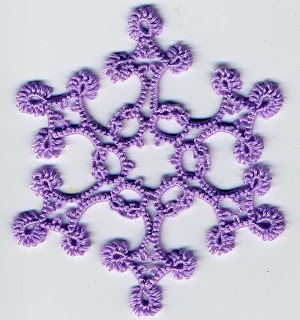 There are so many snowflake patterns available now, I cannot keep track. This was very easy to design, but is it too similar to anything already published? If this looks too familiar to anyone please let me know. On the points, I have Mrs Mee pearl rings, but if someone else has already published something the same shape with regular rings, I wouldn't think that would make it enough different for me to proceed.

A few people had questions about the "pearl" technique last time. With this technique, rings or chains are made entirely of half stitches instead of the usual double stitch. Sort of like Josephine rings with picots, but the picots come between every two half stitches. Picots with just a single half stitch in between would not be stable enough and could easily get pulled out of shape in my experience.
Posted by Martha at 10:09 PM 14 comments:

Off and on I have been studying a really old pattern book, Tatting or Frivolite, by Mrs Mee and Miss Austin. It is not dated, but was published before (or during) 1862. A partial copy is available through the
Antique Pattern Library or through
Georgia’s site.

Deciphering really old tatting patterns is a challenge, complicated here by the fact that part of the introduction is missing. Even worse, Mrs Mee used terms which later came to have different meanings. 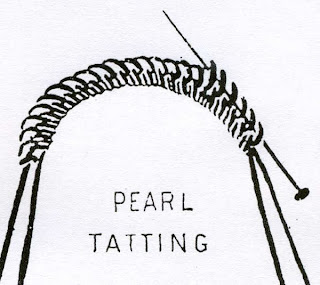 Her “pearl tatting” was entirely different from the pearl tatting technique we know today, as introduced by Mlle Riego a few years later in 1867.


Here is an excerpt from Mrs Mee’s book:
“PEARL TATTING. This is formed of 2 stitches, 1 single and the next take the upper thread and pass it over the pin towards you, passing the shuttle through between the 2nd and 3rd fingers as in single Tatting; the two stitches are required to make 1 pearl, counted as one, as in double stitch.
A pin and ring is often used, but the chain is in the way, and I much prefer a common pin of a good size as shown in the engraving.”

Today, we would say, 2 second part half stitches with a picot in between. We are used to half stitches giving a twist to the work, as in Victorian sets or spiral chains, but with this technique, the half stitches lie flat, and the twist transferred to the picots, giving a bit of a swirling effect. Subtle, but lovely, yes? 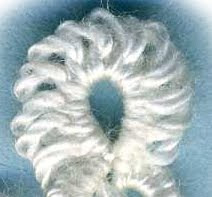 Oddly enough, I get the best results making the picots (pearls) freehand. When I try to make them over a pin as shown in Mrs Mee’s engraving, they just don’t work. I think passing the thread around the pin pulls the next half stitch forward enough that the picot does not take on the full amount of twist. I will have to study further to decide if the problem is my technique, thread size, or whatever. 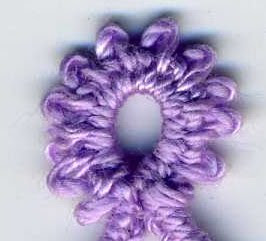 However, if you use this stitch with a wider picot gauge, something AMAZING happens, just look: 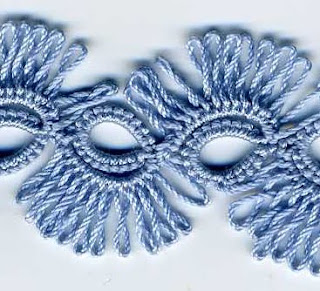 I am using this stitch in some pattern I am writing now. The only question is deciding what to call it. If I say pearl, that might be too easily confused with pearl tatting. I could call them “Mrs Mee picots” though that’s a little cumbersome. Hmmm.

This is a snowflake adapted from a Mrs Mee pattern that I will be teaching at the Palmetto TatDays this fall: 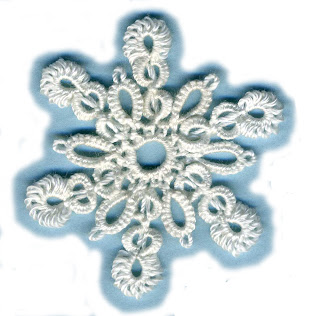 By the way, thank you to everyone who responded to my last post about tatting notation. It was reassuring that so many of you agreed with the version I was thinking of using. On the other hand, I realized too late that though this solves the quandary of how to write the lines with special picot, that might force me to rewrite the rest of the pattern in the same style. I’m still thinking about that problem. I seem to get further and further behind on this project.

Oh, and don’t worry, that book (if I ever finish it) will have lots and lots of diagrams.
Posted by Martha at 12:55 AM 15 comments:

In Which I Contemplate Tatting Heresy 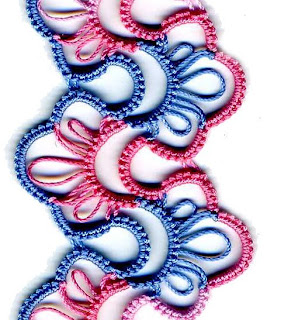 In general, people seem to think that the old fashioned written out pattern style is a bad thing, and the newer short hand patterns are a good thing. Usually I agree, but there are times, though, when the old style is much easier to write, and perhaps easier to read as well. My book in progress is about picot techniques, and I am really tempted to backslide a bit in notation style.

I am a little hesitant to move away from the trend to standardize pattern notation, but I would like to make this set of patterns as easy to follow as possible. What do you think?
Posted by Martha at 1:00 AM 24 comments:

A week ago today, I did something I had not done for a long, long time. I wound some shuttles and tatted! Can you imagine? It had been such a long time, after having been too busy, too tired, too disorganized. Since then, I've managed to do a little every day, as you can see above. The second one is still in bad need of blocking. I haven't managed to scan the rest. 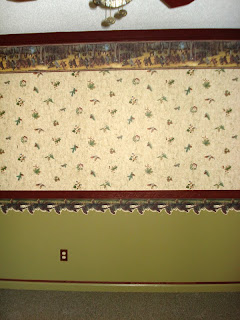 This was the master bedroom in the "before" stage. 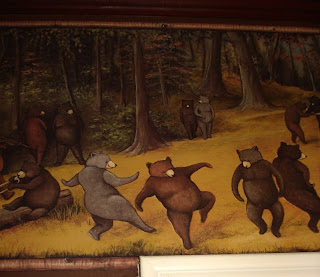 Take a closer look at that wallpaper border. Seriously??!! I wouldn't have been able to sleep with all that going on. 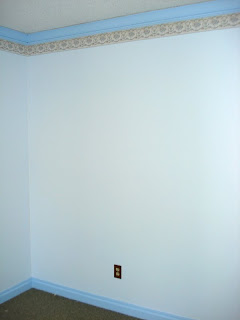 This is "after", well, almost. I replaced that green carpet after taking the picture. Simple is good.
Posted by Martha at 12:37 AM 12 comments: