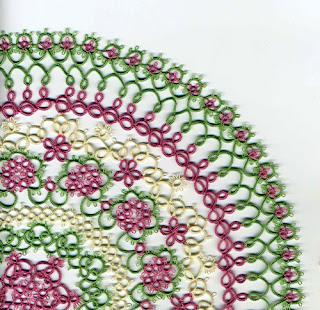 I'm finding this row slow going, though I've gotten a little more comfortable with the "manuevering" around the rings.  Will I ever be done in time for the fair?
Posted by Martha at 1:16 PM 11 comments:

A Cover for the Angel Book 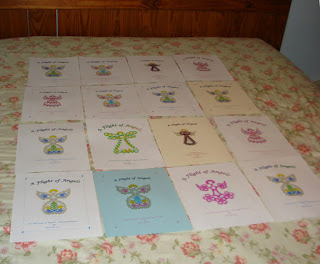 This weekend's project was to design the front cover for the upcoming book.  I have to try out different things to see how they look, especially since printed pictures don't look the same as they do on the computer screen.  Now to order some binding spines and hope the color will work with my favorite cover.  If not, there's Plan B with my second favorite cover.  I learned last time not to leave the spine color to the last minute.

Progress on the book remains good, but I'm not getting any actual tatting done.  Where does the tme go every weekend?

Remember Palmetto TatDays is getting closer! There is still time to register, and scholarships are available.
Posted by Martha at 12:05 AM 2 comments:

Test Tatters Save Me from Myself

My test tatters are always such a help when I am working on a pattern.  It isn't just a case of pointing out the typos.  They will point out that there is a problem with this, or it would be better if you did that...

I don't mind rewriting the patterns to incorporate their suggestions, because it makes for a much better pattern.  Sometimes working in their suggestions inspires me to change the pattern even more, and then they gently, tactfully, kindly, firmly tell me, no, it was better before you did that.

This little angel is one that will stop with its next to last version.  It went through around five versions to get here, with deciding how many picots on the wings, how many rings in the skirt, where to make the joins, and etc.  My friend shared with me that she had difficulty making the second wing from the back side, so we revised the pattern so both wings worked from the front side.  Then I had the bright idea to change the skirt.  Well, that night it seemed like a good idea.  Fortunately, she was honest enough to tell me she didn't like it.  A few days later, looking at it fresh, I didn't like it either.

This is one of the smaller patterns.  The large one  Jane tested was another one of these.  I said look at thia great idea I had to change the wings, and she had to tell me I didn't really want to do that.  Overthinking and trying too hard are some of my special skills.

Book progress continues on slow but sure.  What is it with MicroSoft Word 2010 and footers anyway?  I never had this sort of problem with page numbers before.  When I would be on one page, the page number on another page would jump to another position or disappear altogether.  I never did get them all exactly alike, though I reached the good enough stage, and then next time I opened the file, the type size on them had changed by themselves.  Must be gremlins.
Posted by Martha at 12:55 AM 2 comments:

Happy Independence Day!  We celebrated with a walk up to the Guilford Courthouse Park for their festivities. 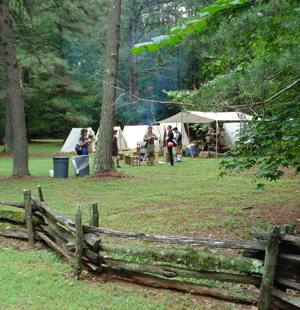 We stopped by the reenactors' camp. 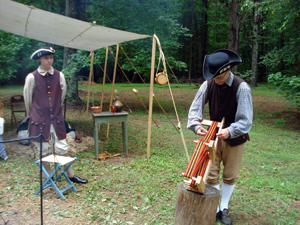 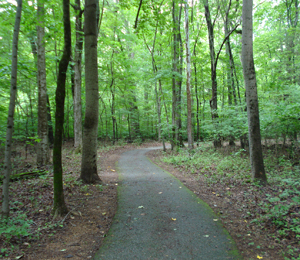 And experienced the beauty of nature.

And enjoyed the fife and drum music before the commemoration service at the grave site of two signers of the Declaration of Independence. 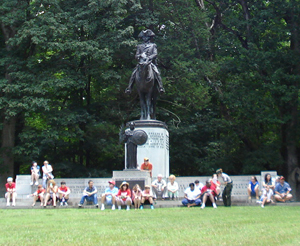 General Nathanael Greene watched over it all.
Posted by Martha at 4:07 PM 2 comments: