The Battle of Guilford Courthouse

I recently got to attend the annual reenactment of the Battle of Guilford Courthouse. I had wanted to do this for a long time, but it never seemed to be convenient before. Since we moved last year, it is now very close to home, hooray! 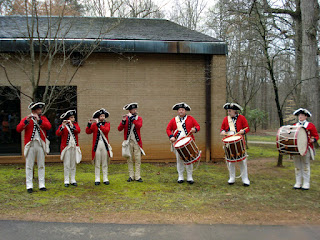 Though these men (and women) are wearing red coats, they are Americans. They explained that in the 1st Maryland regiment, the fife and drum corps wore the opposite uniform colors so that the officers could find them in a hurry. They were used to give signals during battle as well as for music. 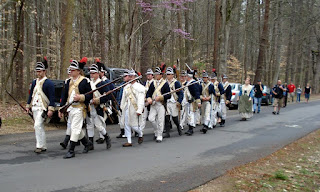 Walking up the road through the park, I came across this company of soldiers on their way to the battle site. They soon left the road and melted into the woods. I heard someone say they were Hessians, so though they are wearing blue, they are the enemy. During the battle, the cavalry of both sides were dressed in green. It's not always obvious who's who. 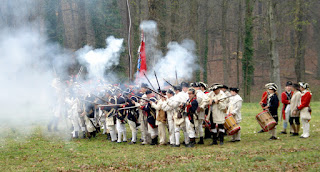 It's a two day event, and I went on Sunday, only to discover that day they were performing the smaller, southern section of the battle. If I had gone on Saturday, I would have seen the main battle with more soldiers and cannons. It was still fun, and I know to go on Saturday next year. Besides the battle itself, there were several army camps, craftsmen and suttlers, plenty to see all day. 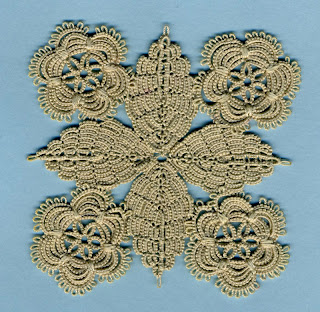 Here is my completed Tischband motif for Umi&Tsuru's Tat Along. Several of the other participants said they had trouble getting the pieces to fit together. I had wondered if the way they were joining the flower chains to the round below instead of to the base of the center rings altered the size of the flowers and threw off the proportions, but no, that wasn't it. I hoped to have better luck with the way I had made my joins, but as I added in the leaves, my motif also was too crowded. (It looks better now after blocking and ironing.) The flowers might have fit better if I had joined to the picots next to the middle ones instead. I looked back at the book's photograph to see if I had misunderstood where to join. My conclusion? Though the pattern for "Blute 1" has 6 rounds, in this design, the photo seems to show flowers of only 5 rounds! Will someone else look at their book to check if I am imagining this? No wonder the pieces won't fit.

Anyway, I've admired the Scharf leaf motif for years, and I'm glad I've finally worked some. I think I will claim the leaves as another motif for my 25 Motif Challenge. This books still calls to me to make some of the doilies some day.
Posted by Martha at 2:42 AM 12 comments: 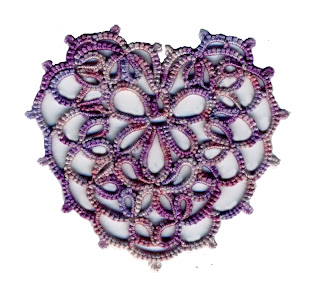 I actually made a motif from one of those unused books on the shelf! How did that happen? Probably because I have lots of other things I am supposed to be working on :)

This is "Heart Nouveau" from Karey's Hearts Belong to Tatting, and make in some of Karey's hand painted thread. I thought this pattern was interesting because of the way the long rings just below the center are made to curve.