Palmetto Tat Days is the event I most look forward to every year.  In the spring, the suspense grows, waiting first for the teacher list, and then to see the class projects.

The pages are still under construction, but you can see the class projects HERE and the schedule HERE.  There are some amazing projects here.  Now the suspense waiting for registration to open.  As a teacher, I'm busy most of the time, but I can pick a class for my free time. What will I choose?

Above is the logo designed by Erin.  Isn't it clever?

Sometimes, when I should be doing something more productive or going to bed, I do a little online window shopping instead.  Look at this bargain I found HERE on Amazon Canada.

A fifteen page booklet for $1717.16 Canadian, or approximately $1373.46 US.  Less than a thousand hundred US dollars per page!  I boggle at the notion of 15 pages.  How can one of the pages have only one side?  Is this bending the dimensions of the space time continuum?  Maybe that miracle is the reason for the price.  Don't you dare say it's just that the front cover isn't numbered. What fun is that.

And only a little over 6 dollars more to mail it to me.  I'll have to start saving my pennies.

"Retro-tatting" is the humorous term for picking out stitches or untatting.  When we find a mistake a ways back, there is the hard decision whether to pick out stiches all the way back, or just cut off the work.  I am surprised I never hear anyone talk about the rapid method for retro-tatting. 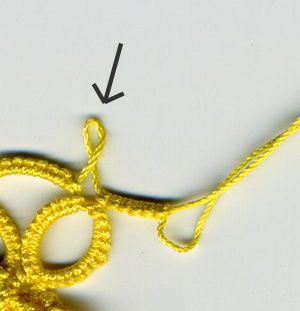 OK, it's a bit tedious, and not real fast, but we're tatters, and slow and tedious is what we do.  Sometimes it beats picking out stitches.
Posted by Martha at 12:43 AM 11 comments: 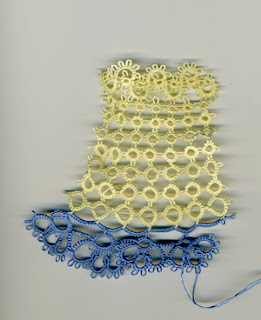 The Voices In My Head Are Arguing

Earlier this year I was suffering from "tatter's block."  I had trouble finding any project I felt like doing, or that would hold my interest once begun.  A little voice in my head said, "you'd rather be spinning."  I held it at bay until I had managed to eke out enough patterns to apply to teach at Palmetto (yay! they accepted me), and then I got out the spindle. 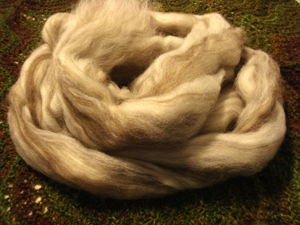 I had this batch of mixed BFL from the Spinnery in Gatlinburg that I was eager to try. 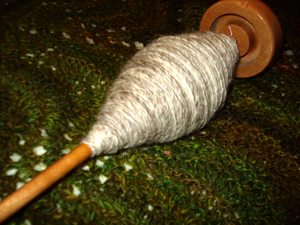 I was having such a good time that I ordered some more from Etsy seller Beesybee.  (I am "spinning from the fold," long draw technique, in case anyone cares.) 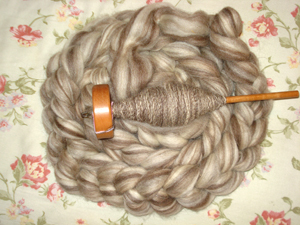 The batches are quite similar, just differences in lighting.  They will look good plied together.

And then, as I am about halfway through, the voices in my head say, "It's time to tat!  It's time to design.  You CAN produce a book this year!"

Dare I listen?  It's a little later than usual to start in on a book to be ready by Palmetto-time.  Can I pull it off?  Should I try? The voices make my head spin.
Posted by Martha at 3:13 AM 8 comments: 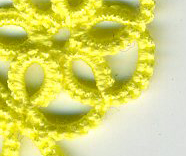 I did that thing you're not supposed to do when designing.  I didn't write down what I was doing as I went along.  I thought I would get back to it while I still remembered what I was doing... and I didn't.  And I also tell myself I can always go back and count stitches, but I didn't take into account that I'm using very small, very pale thread.  Oops.  I hit on the solution to scan it and then blow up the picture real big. That helped... a little... maybe.

Later:  Hmmm...maybe next time, up the contrast with Photoshop too.
Posted by Martha at 11:36 PM 10 comments: