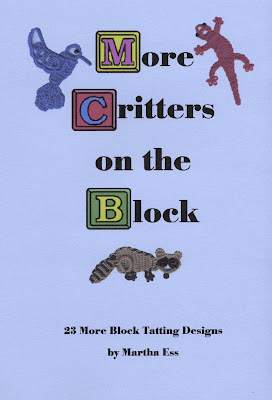 I am pleased to announce that More Critters on the Block is now on sale.


I will, of course, be bringing plenty of copies with me to the Palmetto TatDays conference.


Here are a handful of the designs. 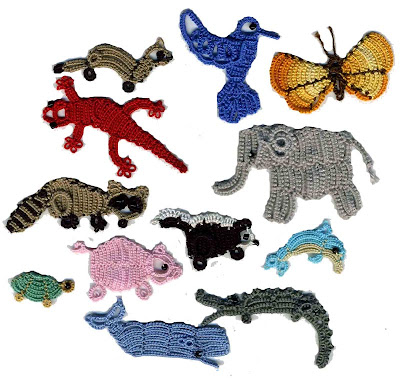 Despite the recession, we decided to keep the price at $10.00 plus shipping, like my other block tatting books. You can go to my site here for links to buy a single copy through PayPal. If you would like more than one book, email me and I can send you an invoice for reduced combined shipping. There is an address there too, for snail mail check or money order payment.

I would like to thank my test tatters, Jane, Heather, Pamela, Stephanie, and Sherry for all their help.
Posted by Martha at 2:34 PM 10 comments:

Danny was surprised by a visit from Feargal and Miss Scarlett. They had timed their visit so they could travel with Danny to Palmetto TatDays. "You are going to have so much fun!" he said. Since they were tired from the journey, at first they just sat and talked. Danny enjoyed hearing all about their Grand Tour and getting news of his cousins. (Miss Scarlett noticed how he especially perked up when they were talking of Maebh, but she didn't say anything.)

Then Feargal was ready to unpack and show off his skateboard. Danny tried hard not to look envious. Then he showed them around the apartment, and suddenly Feargal stopped and said, "What is That?"

"That's the book stapler," said Danny. "You have to jump on it real hard to staple a book. I can do it, but it may be too difficult for you." (Leprechauns are naturally competitive, if you hadn't noticed.)

But Feargal's eyes took on a strange gleam. "That's not a stapler, that's a skateboard ramp! I can skate down that, turn a flip in the air, and land." 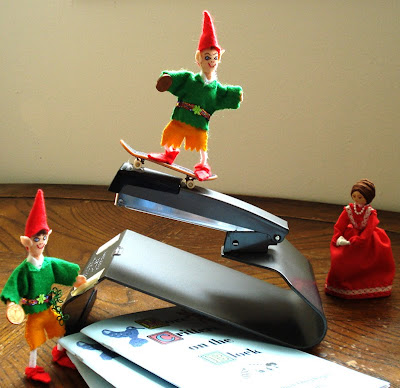 "Oh wow! I've got to see that," said Danny, now obviously awed by his elder cousin.

"You musn't," said Miss Scarlett. "It's too dangerous!"

"It will be great!" said Danny. 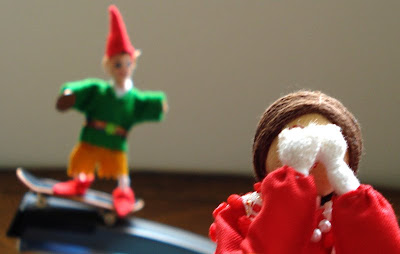 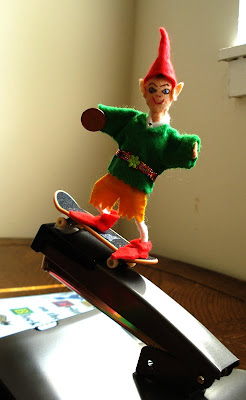 Feargal skated down the ramp at great speed, but what came next wasn't exactly a flip in the air. In fact, it was nothing like a flip. Suffice it to say, it's a good thing he is a magical being, so he was not injured in the fall. 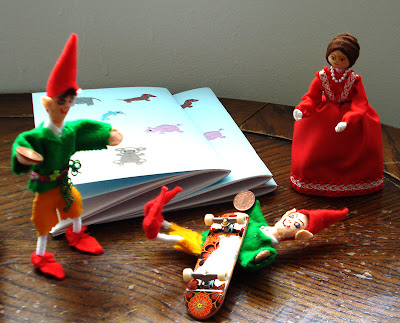 Danny said, "That was awesome! Can you teach me how?"

Is your leprechaun coming to Palmetto TatDays? Let me know, so I can add them to the list of "Who's Coming". 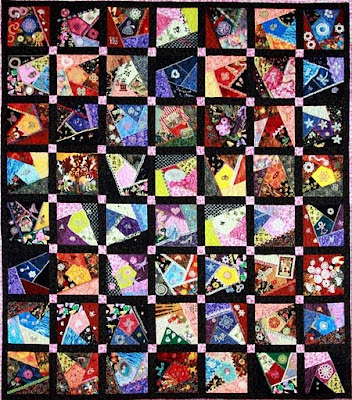 CORRECTION: I previously said Palmetto registration was open through Aug 15, but the correct date is Aug 11.

Time is getting close for the Palmetto TatDays, August 27-28 in Toccoa, GA. Registration is open through August 11th, so there's still time to sign up. I've got so much to do to get ready!

Meanwhile, our northern cousins, the Fringe Element Tatters are having their fifth annual tatting convention September 24-25 in Cambridge, Ontario. This even sounds like a winner too! Click here for information.

Since I last mentioned it, the Palmetto Quilt drawing has posted pictures here of LOTS of tatting embellished quilt squares. A donation to the Palmetto scholarship fund will enter you into the drawing.