I love my Aeros, really I do. I hardly every use any other kind of shuttle, except now and then I need something that can hold more thread. Then I pull out my Tatsy, or one of my Russian beading shuttles, but I miss the built in hook so very much. Sally's husband came to my rescue and custom designed an oversized shuttle with a built in hook. (Yes, that's " 'im in the garage" who makes those popular Pop-a-Bobbin shuttles as well.) This shuttle is just wonderful. It's a beauty to look at (rosewood, one of my favorites!) and feels good in my hand. 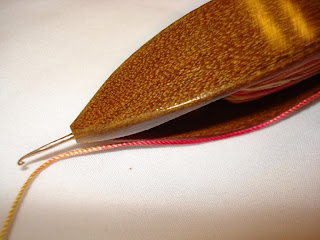 Here you can compare the size with some other shuttles. 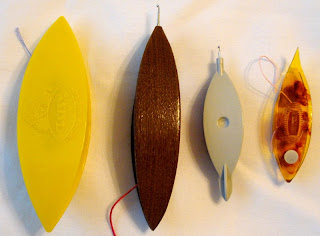 I put it to the test with hemp beading cord and size 5 thread (from Karey) and it performed beautifully. 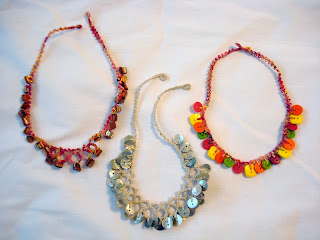 Coming Soon--More Critters on the Block

victats@gmail.com said...
All of your test tatters have been tormenting us with pictures of your new patterns...when is the new book comming out?

The answer is August. Definitely in time for the Palmetto conference. My team of test tatters is turning out critters at an amazing pace, though I am getting bogged down with perfecting the last few patterns. It always works OK out in the end, though.

Thank you to everyone who answered my earlier blog post with suggestions of critters to make. Before I knew it, I went from too few ideas to too many. There could be another critter book way down the road with the leftover ideas.

On a different note: when (if?) I get a little more caught up, I'll tell you about the new love of my life. Here's a pic: 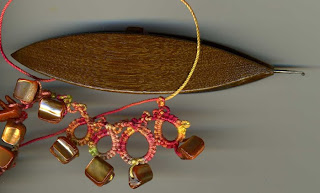 With a Little Help From My Needle Tatting Friends

I'm a shuttle tatter because that's how I learned, and that's how I write my patterns. In the past I have been helpless at helping my needle tatting friends adapt the shuttle tatting style patterns for my Palmetto classes. I vowed to do better this time after they had some trouble dealing with one of last year's class projects. So I wouldn't be so unprepared, I asked some friends for som help. Wally answered some questions and gave advice. Heather tested the patterns "needle-style" and gave lots of advice too. I am really grateful to both of them.

For any needle tatters out there who may be coming to Palmetto this year, (especially you Southern Belles), here is Heather's assesment of my class projects.

The bookmark above will translate very easily to needle, though you may prefer a vertically held picot gauge to the horizontal picot gauge recommended for shuttles.

I had figured out a way to make this beaded bracelet with the needle, but Heather suggested an easier way. Some of the beads will be strung onto the ball thread and others added as you go. You will need a crochet hook or needle threader that can transfer beads onto the thread, but the tatting needle does not pass through the beads. 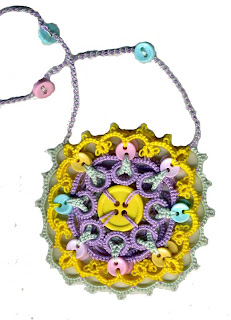 For the Celtic button project, you can make one square and use it as a pendant (see previous blog post), or make two squares and turn them into an amulet bag. The squares themselves will be easy enough to do, but needle tatters will most likely prefer to substitute something else for the long lock stitch chain shown here. Some suggestions will be provided in the handout.

Here is that pattern reworked for this year's theme. I cannot whole heartedly recommend this class for needle tatting, though no one is unwelcome. To make it in two colors would require two long lengths of thread with the danger of tangling. The lock stitch chain, while possible to do, would be tedious. Neither of my friends thought of a way to make a single color split ring while working with two colors of thread. If you wanted to make this with needle tatting, the easiest way would be to make it all one color with needle and ball thread. You could substitute a regular chain for the lock stitch chain and a regular split ring for the color-hiding single shuttle split ring the shuttlers will be making. BUT, making it all one color wouldn't look nearly as interesting as the shuttle version. Proceed at your own risk.

Thank you again to Wally and Heather.

The sneak peeks of the Palmetto class projects are now posted here. You must click and view now, really you must.

Check out Erin's sparkly pink poodle. And Anitra's lifelike bear. And Riet's complicated butterfly. And Nina's jewelry, gorgeous as always. And Sharren's dragonflies. And Karey's breathtaking tree. Wally has some adventures in rolled tatting, and it looks like Georgia will show us how to decorate things with our tatting. And did I mention a really sparkly, really pink poodle? I always look forward to Palmetto as the high point of my year, but now I am practically hyperventilating with desire for the pattern CD. Since I teach, I have just one free period to take a class. I wonder which one it will be.

Below is an alternate version of one of my class projects. 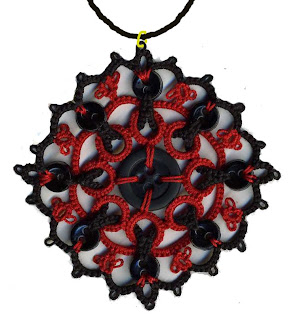