Well, after that disappointment described last time, years went by, and I would binge on one type of needlecraft, grow tired of it, and switch to another. In the late 1990's I had been on a long spell of crocheting and beginning to weary when something happened. I got one of my kids to show me how to log on the internet and use a search engine. (Had to go to the public library for that!) There were tons of hits for crochet, but a much smaller, more manageable number of tatting sites. And the tatting there was much more exciting than my Dover reprints.

I began to lurk. I discovered Celtic tatting and adapted the concept to crochet. (Yes, I did go back to sending stuff in to magazines eventually.) 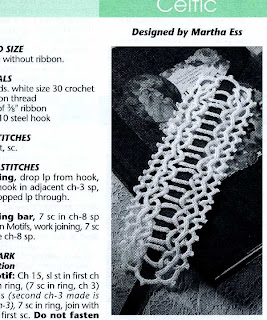 I remember telling myself that was the last crochet I would do for a long time, because I was ready to tat!

I don't know how long I kept on lurking. Then on Oct 28, 2000, I came out and introduced myself on TatChat. (I know this since I found a copy of part of that post whilst cleaning and sorting.) The title of that post was something like "I tatted a cat and a bat", because not only did I introduce myself, I shared patterns for two little doodles. I was designing tatting again.

There were no pictures with those introductory doodles, and the notation was primitive, but one could take that message and maybe tat up something like this: 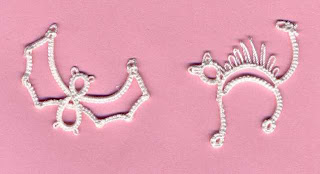 I worked those up today, and about an hour later, I found the original cat in all its lumpy size 10 glory in one of my endless bags-o-stuff. What fun! 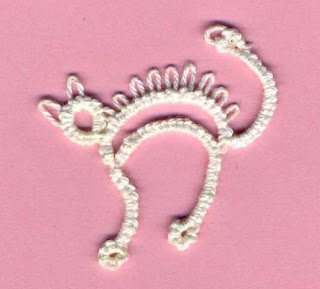 That December I made up my Hairpin Lace Angel, and a few months later the Itty-Bitty Bumble Bee which became the original block critter. I was off and running.

I hope my trips down memory lane don't seem too egocentric. Tell me to stop. Who knew sorting and packing could be fun. I have this nagging suspicion the rest of the apartment won't be so interesting.
Posted by Martha at 11:25 PM 7 comments:

Almost the End of My Designing Career

I was sorting and discarding stuff in preparation for moving and I came across this old rejection letter from Workbasket: 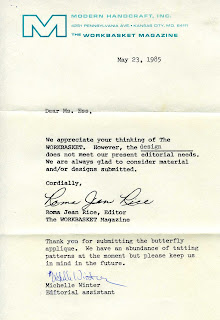 I remember thinking, "If they were overstocked on tatting patterns, there wasn't much use in trying, was there?" I quit working on refining this heart: 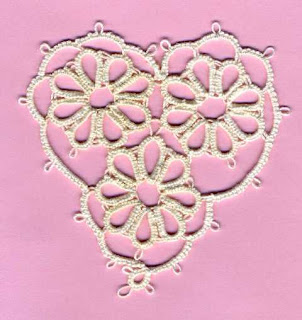 Yeah, right, I know now that a heart built around 3 circles isn't exactly a new frontier. It's been done, but remember way back then, I was tatting in a vacuum. I had a couple of books borrowed from the library, a fairly new subscription to Workbasket, and whatever Dover books were at the local Borders.

I also quit working on a large centerpiece I had been designing. It had (or rather was going to have) a border of butterfly motifs all around it. Later I learned that had already been done too. That UFO is in a box somewhere--I come across it once every few years while looking for something else.

I didn't quit tatting altogether, though for a while I didn't do much more than produce some doilies or edged pillowcases for Christmas presents.

P.S. Needlecraft for Today didn't want it either: 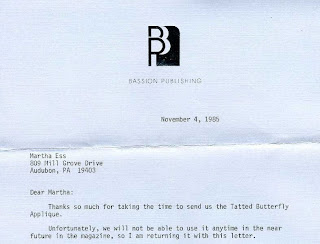 P.P.S. It wasn't such a great butterfly, so I can see why they didn't want it :) 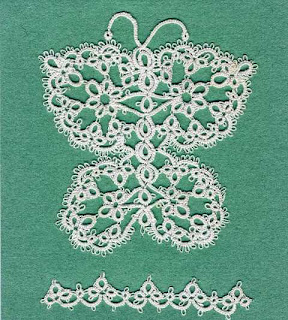 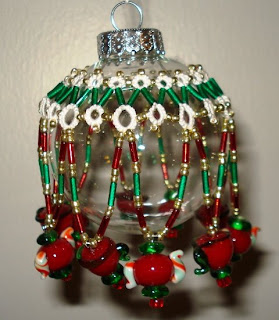 I have vowed to do something I have rarely done in the past -- to actually finish projects started in classes. Above is the ornament from Ginny W's class at Hector. She provided kits with these cute teapot beads. Her pattern called for seed beads on the long beaded picots. I could say I was being all independent and creative and used bugle beads instead. The truth is the seed beads I packed the night before turned out to be quite the wrong shade by light of day. I was lucky that I happened to have these other beads with me that coordinated pretty well.

This is the bookmark from Karey's class. I already knew how to throw a ring off the second half of a split ring, so this was pretty easy except for keeping all the stitches "front sided". Believe me, by Sunday afternoon, an easy pattern was all I could handle :) I used an amethyst chip for the charm at the beginning, and picked up the violet color again in the tassel. My first tassel had too much pink, but this one has too much violet. I'll fix that later.

I will let this be the beginning of a new 25 Motif Challenge, but this time, only patterns by other people will count. I have so many books and so many downloaded patterns that have gone unused. It's time to start using more of those.