Here are some class projects from this year's Palmetto TatDays, earlier this month. 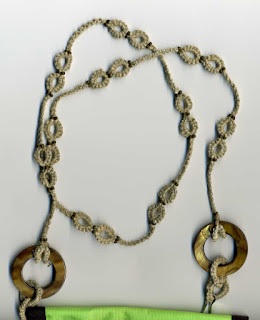 During regular class time, I had only one free period, and chose Karey's Pendant Necklace class, and even finished the project later that day.  I adapted it to make a lanyard.  My beads are small, but the only ones I could find locally that went with those rings I wanted to use.  I think I will remake those lower sections to match the rest. 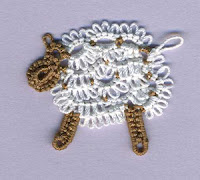 Anyone who knows me well, knows it was greatly out of character for me to get out of bed early enough for the Early Bird Class.  But I greatly admired Karey's Leaping Lambie and wanted go give it a try.  Unfortunately, my brain was still asleep, so after numerous mistakes, I had to trash my in-class project. I made this one after I got home.  It's an interesting pattern, with an onion ring in the head, and roll tatting in the feet.  The pattern also appeared in the August issue of Tatting Times. 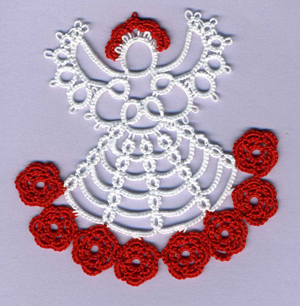 Another pattern I made after getting home was Erin's Flowery Crinoline Angel.  Isn't it pretty?  I added a halo.

One of the great things about Palmetto is that they make a pattern CD, so people who couldn't come (or could only be in one place at a time) can get the patterns so they can share the fun.  On the Palmetto site, they say this year's CD should be on sale soon, so check back HERE to find when it is available.