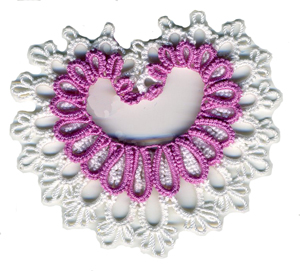 I decided to get back into the swing of things with the project from last week's Online Class, the Sweet Heart Valentine by Pop Lenuta Maria, with help from Karen Cabrera.  You can see the pattern HERE.  Muskaan made some beautiful 2 color versions and wrote about them HERE and HERE.

I started off and quickly ran into trouble.  My large rings on the backside layer wanted to twist and curl and the picots were getting too bunched up.  This sort of thing happens sometimes when there is too much tension closing a very long ring.  Usually, I can fix this by closing the ring part way and then loosening up the scrunched up part before finishing the close.  This wasn't working very well for me this time, maybe because the 2 layer effect made it harder to get to the early part of the rings.  Or maybe it was just me that day.  Also, I was working with 2 colors, with a twist between rings, but I didn't like the way it gave color blips between rings.  I cut that one off the shuttles and tried again.

I asked Muskaan's advice since her hearts looked so nice, and she said she did not twist the colors between rings, so I quit that.  I also tried adding a join between the large rings on the back side to see if that would make them lie flatter, and decreased the number of picots. Well, that was better. Muskaan had warned that some bare space between rings was recommended, but I must have not made my bare spaces big enough because my motif curled up quite a bit and required some stern blocking.


So then I thought, working the pattern as orignially written, with all the rings made with the same shuttle might create the proper spacing.  This was much easier to flatten.  It curled up just a bit, but it was easy to mash down just a little and give it a quick press with the iron. 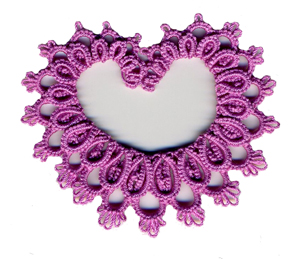 If I ever work this again, it might be a good experiment to make it with 2 colors, and work chains of a few ds between rings.
Posted by Martha at 2:32 AM