Or, One Heart, Many Friends 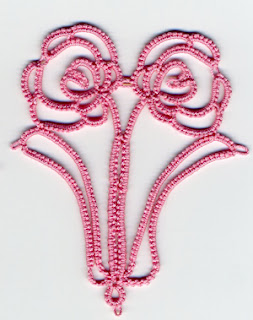 I was working Karey's Sonata Heart Pattern, pictured above, with several of my own adaptations.  (The pattern is in her book "Make Many Merrily" and earlier appeared in Tatting Times, though I have mislaid the issue number.) It seemed so unusual that there was a picot inside the dimple of the heart shaped rings. I thought instead of hoping the picot will poke out in the right direction, why not use a "down picot" to make sure it will point down.

Dimpled rings are notoriously hard to close, and I thought of my friend, Sue, and her "Dimpled Yorkie Rings."  She closes the rings in two steps, by pulling on the core thread within the dimple.  Click HERE for a video of it, shared by another friend, Sherry P.

Here's how I did it, and please forgive the awful pictures. 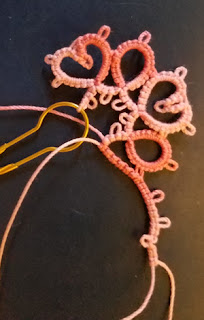 Begin your dimpled ring, including the down picot. Before making the join, open up the ring around your hand as wide as you can to have enough thread there to finish the ring. 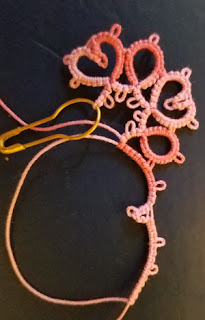 Make the join, and tat the rest of the ring. 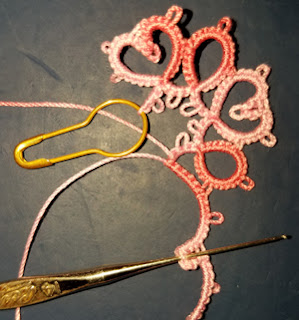 To get a hold of the core thread, insert a hook down through the picot, and up through the space below the join. 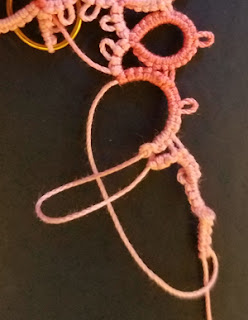 Pull out a loop of the core thread. 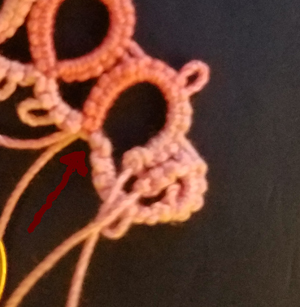 First pull on the left side of that loop, so the two halves of the ring meet at the bottom, and the first half of the ring has the right amount of tension.  It may take a little practice to get used to finding the not-too-loose, not-too-tight spot. 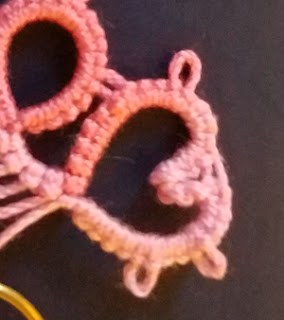 Then pull the shuttle thread until the core thread loop is reabsorbed. 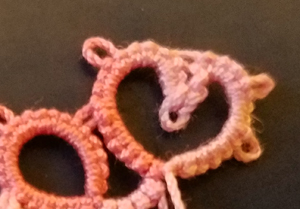 By now, your down picot is probably cowering somewhere on the back of the work.  Find it and pull it back into position.

Notice that the picot fills up part of the space inside the heart ring.  If you want to add a down picot into a pre-existing dimple ring pattern, you may want to decrease the stitch count inside the dimple so it doesn't stick too far down.

When did the dimpled ring originate?  I used to think it was in Mrs Beeton's "Book of Needlework" 1870, but on closer examination, this pattern is actually all chains.  She changed directions by using a picot followed by a half stitch, followed by a reverse work.  Does that remind you of someone? 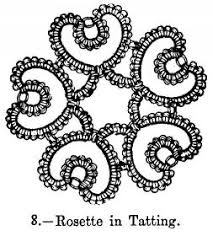