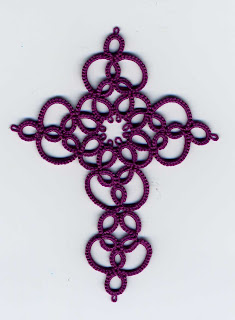 Sometime late last year I made this series of crosses. The pattern is "Rockingham" in Mary Konior's Tatting in Lace. First I made the solid version above. The pattern is written in 2 parts, but I figured out how to make it all in one pass, using a split chain and a split ring to move into the last section on the bottom. So far, so good. 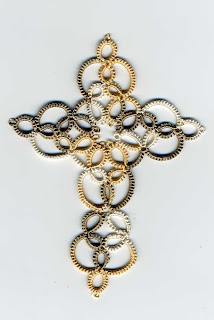 Next I worked it in this variegated thread I got from the Thread Exchange. This is a size 10 rayon thread. I ran out of thread on both shuttles too soon, so I ended up making it in 2 parts anyway. Even though rayon thread is usually slippery, it was oddly hard to close rings completely. The ring where I worked in the ends stretched out of shape. I've got a little of that thread left. I keep meaning to rework that bottom part, but you know how that goes. 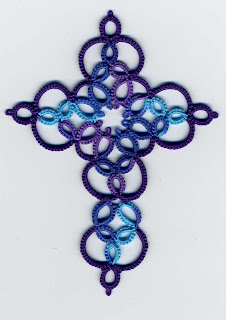 After doing a solid and a variegate version, my next project was to make the pattern with both types of thread. Still stinging from running out of thread the previous time, I wound plenty onto both shuttles. About halfway through, it occurred to me that I couldn't work it in one pass anyway, because the split chain would show the wrong color. Or could I? I remembered Jane had shown a new technique for a Single Shuttle Split Chain. It was something I had looked at and decided I would probably never use since I was satisfied with my split chain ability with the traditional method. However, it was just what I needed to preserve the color scheme here. Did it work? Yes. Was is more time consuming than just working the cut & tie & hiding ends? Well, maybe. Still, it's one more technique in my "tatting toolbox." (Note I also used the color-hiding single shuttle split ring trick that Tatting Chic and I worked out.)

I've been neglecting my 25 Motif Challenge. My goal this time was to count only motifs from books. I think this is only motif #3. I really am behind....
Posted by Martha at 11:09 PM